Home / Musings / The Joys of Boys

The Joys of Boys

I’m the youngest of three and have two older brothers, and it seems that when there’s one girl and multiple boys in a family, there’s very little middle ground—the girl ends up being either uber girlie, or a serious tomboy. I was the latter, preferring Toughskins jeans, hand-me-down tee shirts, and beat-up, nondescript brown jackets over anything that remotely looked like it came from the girls department. 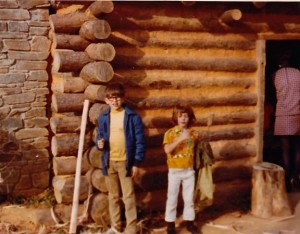 My mom occasionally tried to get me to wear a dress, but her efforts didn’t always work out so well: I very clearly remember scribbling brown marker all over the front of a dress I hated and telling my mom it was dirty. She was furious—the dress, in retrospect, was pretty cute, with a big red tulip hand-stitched on the front—but I found it itchy and horrible, and it was, well, a dress. My punishment was that I had to wear the dress for three straight days, with brown marker all over the front, and I think that was about the last time I ever pulled a trick like that. But it certainly didn’t make me embrace dresses, or tulips for that matter.

Not surprisingly, I spent a good deal of my childhood explaining to people that I was actually a girl. At one of my parent’s parties, the hired bartender asked me if I wanted a Roy Rogers, when all I really wanted was a Shirley Temple. A helpful salesman at Crown Books directed me to the superhero section instead of Nancy Drew. The barber who cut my brothers’ hair once gave me a boy haircut too, not quite understanding why I was crying by the end when I realized that the clippers he was using weren’t for neatening up edges but, rather, for cutting all the hair over my ears in a neat half-moon.

Things didn’t change all that much when I fell in love with horses and started spending all my time at the barn with other girls—while they rejoiced in wearing jodhpurs and beautiful paddock boots, I was happiest in jeans and muck boots. They braided manes and tails while I shined saddles with spit and Murphy’s oil soap.

After college, I lived in a group-house and shared the bathroom with two male housemates while the other female got the master bath. (She did pay more rent, and she was from a family of four girls, so it wasn’t something anyone ever had to discuss. It just made the most sense.)

And now, I’m the mom of two boys, which was probably a supremely smart move on the part of God or whomever is in charge of doling out babies to families, because I am far more comfortable digging in the dirt for worms than I am digging through piles of princess barrettes. And after growing up with boys, I find it relatively easy to interpret what is a preoccupied grunt vs. a rude grunt, or what is a game of hitting and kicking vs. an actual fight. I understand that being the mom of two boys is very similar to being the caretaker of two Labrador puppies: They need to be taken outside daily for a run, and their paws need to be wiped off before coming into the house.

Still, there are times when the inner girl in me cries out for a little attention. My dreams of reliving my youth at the stables was quashed early on, when both my baby boys cried in terror at a County fair’s pony ride, and when they refused to even look at the beautiful Park Police horse on the mall, let alone pose for a picture with him. My warm fuzzy thoughts of buying cute little outfits for cute little darlings were dashed when I realized that a) kids’ clothing stores are 75 percent pink and 25 percent blue, and that b) boy clothes are boring. Girls get to wear all sorts of awesome, outrageous clothes, mixing stripes and polka dots with abandon. They wear bedraggled tutus over snowsuits, socks of different colors, and hats and scarves that look like they’re straight from the pages of a 1980s Benetton ad. Boys wear basically the same clothes at five that they will at 50—gym shorts and tees, khakis and a Polo, jeans and a sweatshirt. Even shoe shopping is dull, as we pass by shoes with fantastical sparkles and neon laces for sneakers that look exactly like my husband’s. Yawn.

Even at school, I can’t help but notice that girls get to participate in the super cool Girls on the Run program, giving them a boost of self esteem, a shot of some healthy living, and the joy of participating in a large-scale athletic event with zillions of other girls. I’m so envious of Girls on the Run that I’ve come close to asking my neighbor if I can adopt her girls for the day and wear a pink tee while we’re running. Sadly, there is no Boys on the Run program.

So when the inner girl speaks, I find myself praising Lego and gratefully acknowledging that we live in Northern Virginia, next to a huge shopping mall. Because on those days, I pack up my boys and head to Tysons. They get the Lego store; I get to window shop, taking in some sparkle and bling and dazzle in a place without bugs, mud or sticks. Really, it’s a win-win.

This article was originally published September 21, 2011 on Patch.com.