The (Many) Annoyances of a Christmas Birthday

Birthdays stress me out.

To be specific, kids’ birthday parties stress me out. It could be that it’s because I’m a Christmas baby and therefore have very few nostalgic memories to fall back on when it comes time to think up great ideas, because I’ve had very few birthday parties.

My mom tried really hard to make my birthdays special, but let’s face it: It’s pretty hard to separate a kid’s birthday from The Big Man’s birthday. A few friends over for cake and games? Forget about it – they were all out of town. A slumber party? Puh-leeze. Cupcakes at school? Nyet. 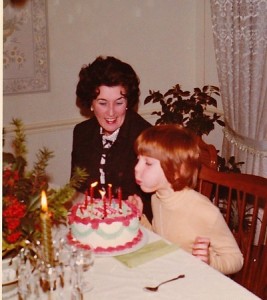 One year, she decided to throw a half birthday, with a “Christmas in July” theme. She propped up a fake tree on the back patio (remember when we called them fake instead of artificial?), decorated it with balloons, and set us all up out in the backyard for a day of summer frivolity and fun. It was pretty great, until one of the moms called her later and asked her to never pull a stunt like that again, as the woman’s son apparently expected Santa to come and was sorely disappointed when he didn’t.

As I aged out of little kid parties, things didn’t really change for the better: I had to wait three whole, agonizing days after my 16th birthday for the DMV to re-open so I could go for my driver’s test, only to be rejected because my driver ed teacher accidentally wrote my date of birth as 12-25-83 instead of 12-25-67. The only solution was to wait until school re-opened in January. And then go back to the DMV on yet another (later) date. When I turned 18, I couldn’t go out for a celebratory beer like all my other friends did. My family threw small surprise parties in honor of my 25th and 40th birthdays, and they were both wonderful, but each time, it was hard to ignore the absence of so many beloved friends who couldn’t come for obvious reasons.

So cue up the violin strings and feel sorry, because my birthdays pretty much come down to cramming in a piece of birthday cake after a huge Christmas meal and then straggling off to church, all the while hoping that at the very least, we’ll get a seat. Good times.

But now that I’m a mom to two birthdate-blessed boys (October and May – possibly the two most beautiful months in Virginia), I’m realizing that my lack of personal birthday party experience continues to be a hindrance as I try to give them what I didn’t have.

This past October, my son’s ninth birthday about put me over the edge, as I careened from idea to idea, rejecting one after the other as the attached price tags to my ideas remained stubbornly over $250 and were, therefore, more than I wanted to pay. A trampoline bounce party for 20 guests but no food: $375. A home laser tag party for 20 but again without food: $275. An insanely cool ropes course and zipline adventure in the woods: $300. (That one I still might just have to do someday.) A dinner out at Medieval Times for our family and a couple friends: $35 to $40 per head, assuming we could make the coupons work as advertised. A trip to the Big Apple Circus: forget it, closing day was two weeks too early. A couple of hours at an arcade: $275. (With prices like these, does one also buy their kid a present?)

We revisited past (cheap) themes – a bowling party or a pizza/movie night at our house – but both were rejected because, God forbid, “we’ve already done that, Mom!” Seriously, it must be a bummer to have a cheap mother who doesn’t have a lifetime worth of party ideas in her back pocket.

Ultimately, we settled on an ice skating party, held on a gorgeous sunny day. (Oh no! Are people going to be irritated that they have to be inside on such a beautiful day?!) The party room was ready for us, and all nine invited boys showed up right on time (Yikes! Did I order enough pizza?!), the assigned host/helper was a doll (GeezIforgottoaskifIcanincludethetiponthechargecard!). Skates were pulled for us (They’re out of size 4s???), kids were bundled out on the ice (Are three adults enough to help those who can’t skate?!), and everyone had a blast.

They loved it. They fell, they got back up, they skated. They swirled and crashed and hung on for dear life, but they had a great time. And every time I looked at my sweet son, surrounded by his sweet friends, I saw him smiling the most perfect smile. A happy, uncomplicated, wriggling-puppy smile. It’s what fills my cup.

Another party, another success, another one done. Another year closer to the time when one isn’t expected to throw their kids a birthday party (When is that, exactly?). Another year closer to being a crying, sorrowful empty-nester. And another year of realizing that my mom must have felt like she hit the jackpot when her third kid ended up being a Christmas baby, and “organize party” fell from her list of responsibilities like a stone.

This article was originally published December 1, 2011 on Patch.com.