Discovering the Magic of Disney through Parenthood 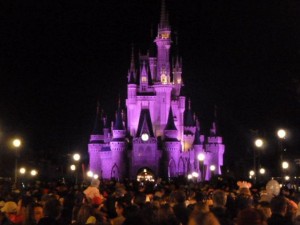 So I’ve always had fond memories of Disney. My first trip there was in the 1970s with my family, via the Amtrak Auto Train.

When Epcot opened in the early 1980s, my mom and I flew down to stay with my Godmother and see what all the futuristic fuss was about. When I graduated from high school and my four-years-older-than-me brother graduated from college, we took a super fun sister-brother trip there. I checked it out a few more times when I was working at Orlando-based conventions, and all the delegates were out golfing.

The last time I was there, Hurricane Jean forced us to hunker down in a windowless room at a college friend’s house instead of riding Space Mountain, but we still had a blast. And any time I’ve ever been asked what famous person I’d like to meet, I’ve always said Walt Disney, because I figure he must have been a crazily inventive, imaginative, curious, whimsical and optimistic guy, and I like those kind of people.

In spite of all that, I’ve never felt as though I had drunk the Kool-Aid when it came to Disney. Yeah, it was a cool place, but I couldn’t quite understand why young couples chose it as the site for their destination weddings. I thought friends who went there in the midst of a boiling hot Floridian summer with little kids were nuts. I couldn’t understand why anyone would want to honeymoon with nine billion other people in long, hot, sweaty lines.

I would occasionally watch those YouTube videos of kids completely and totally freaking out as they learned that they were going to Disney, and I couldn’t fathom my own children having any such reaction: As boys, the whole princess thing was lost on them; they’re terrified of roller coasters and most other rides; and to them, “Disney” meant movies—not a destination.

But then two critical moons lined up: First, Legoland opened in Orlando in October. Second, our good friends and neighbors asked if we’d like to join them on a trip down there, using their Disney points for our “on-property” (check me out, knowing the Disney lingo!) accommodations.

Kool-Aid or no, our answer was a resounding yes. We made a plan for a five-day trip over the MLK holiday weekend, scored some buy two/get two free tickets to Legoland, bought four-day Park Hopper passes (more expert lingo!), and waited. If anyone asked me about our plans, I would blithely wave my arm in the air and make it clear that we hadn’t drunk the Kool-Aid, and even if we spent a few hours a day in the parks and the rest of the time lounging around our hotel with our friends, we’d be happy. We had no intention, said I, of stressing out over a trip to Disney.

The week prior to our departure, Disney veterans spoke to us earnestly about Fastpasses. A free app that tells you in real time what the wait times are at every ride. A book about how to maximize your Disney experience. Web sites to help you plan your visit. We turned it all down. We’re doing Disney the Oppenheimer way, we said, which means no. stress.

The day before we left, our cat sitter told us the sad tale of a colleague who flew her entire family down to Disney over Christmas, only to be told at the gates that the park was at capacity, and they couldn’t come in.

At the airport, we ran into a teacher from my younger son’s school, who cheerfully told us that she had just checked some Web site that rates the parks’ crowdedness, and that Saturday and Sunday were both forecasted at “9”, with 10 being the most crowded it could be.

Our plane was on time. Our rental car perfect. Check-in easy. The pool water warm. The sunset lovely. The next morning, giraffe and zebras and Ankole cattle wandered around right outside our balcony, munching on grass as we ate our breakfast. It was nature nirvana.

We hit Legoland first, arriving bright and early to a parking lot so empty it reminded us of National Lampoon’s Vacation. But unlike the movie, the park wasn’t closed—we just had it all to ourselves. At the Disney parks, we’d head to the most popular rides first for the oft-mentioned Fastpasses, only to find that there were no lines. We’d wander by a show by happenstance, only to see a sign announcing the next performance was in two or five minutes. Trains arrived the moment we’d step on the platform.

We felt for sure we’d miss the evening fireworks display when our shuttle bus had to take a detour; instead, we arrived at exactly the moment the show began, with a perfect view of the Magic Kingdom’s castle. We signed up for a character breakfast and were one of the first families seated, so we didn’t even have to wait in line for personalized Mickey pancakes. We felt like the golden family, breezing through Disney as if an advance team had cleared the way for us. It was bizarre—too perfect, really—and as every minute passed, I started feeling the Kool-Aid.

The parks were clean. The workers kind and helpful. The whole shenanigan expertly and perfectly planned. Seamless. Enjoyable. Magical.

And I realized that in the midst of all the talk of Fastpasses and apps and manuals and how-to books, the one thing no one had mentioned was the difference—the difference between going to Disney as a kid and going to Disney as a parent. Because the ability to bring a kid to Disney, I’ve decided, is the closest I’ll ever come to feeling like I’m some sort of superpower rock star parent. To watch their mouths open in wonder as fireworks explode over a glowing castle … to hear them laugh a big belly laugh as Winnie the Pooh gives them a big hug … to watch their faces turn from fear to joy as they rode their very first roller coaster?

Yup, I’ll drink to that.

This article was originally published January 27, 2012 on Patch.com.